OMG I suck at life and blogging. I just… The end of this school year was so difficult, for reasons. When people say that teachers have it easy, I want to kick them in the shins, because we don’t.

Anyhoo, I finally had time to do a decent manicure, and I wanted to try doing a gradient again, because I’m so bad at it. I covered up my ineptitude with glitter, which is really the best way to do it.

I started with Zoya Blu (a pale blue), then applied a latex shield around my cuticles and sponged on Zoya Ling (true blue). It looked okay, I guess, but I wasn’t digging the contrast area, so I decided to apply a single coat of Rainbow Honey Shark Attack, which is blue glitters, silver triangles, and blood red glitter in a translucent blue base. It not only camouflaged the color transition, but the jelly blue base also tinted the light blue of Blu so the gradient looks less contrasting. And the red glitters provide a little pop of interest. 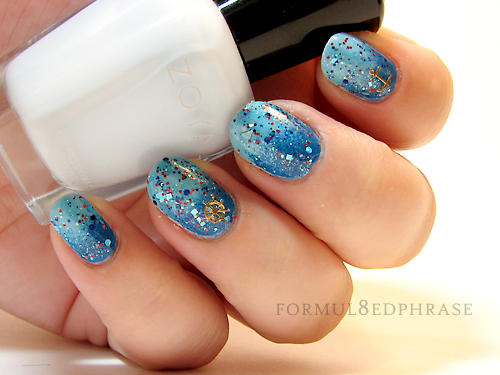 I then added some nautical charms from The Sparkly Shop, but I ended up scraping them off after 24 hours because the edges were driving me up a wall by catching on literally everything, especially Gabranth’s fur.

I should have done this for Shark Week, but let’s pretend it’s for Sharknado 3:Oh Hell No! 😀

What do you think?

4 thoughts on “Mani: Under the Sea”