I’m going to post this a day early, because I’m procrastinating my work. So, I didn’t exactly skip week 04: gradient. I took pictures before I went to visit my mother, but I failed to post on Sunday, and then, you know, I got distracted by events. And now that I’m back in MA, I realize I left my memory card at my mother’s. So. I’ll get back to that week another time; I did an ugly manicure anyway.

This week is inspired by a song. I had a few thoughts, mostly guided by music videos, like Becca did with her nails. In fact, I had the exact same thought as Becca: nail twins! But I wanted to use song lyrics as my inspiration.

I really like the Guster song “Satellite,” so I used it as my inspiration. I did three coats of butter LONDON’s Gobsmacked, which is a black jelly with silver sparkles. It wasn’t as black as I wanted, but whatever. I added a coat of Julep’s new sea salt finish color Sadie, which is really a dupe of Gobsmacked with a more textured finish; I just wanted to see what it looked like. Then I drew the most craptastic satellite ever, using China Glaze Hook and Line (from the Hunger Games 2012 collection), China Glaze Pelican Gray (from summer 2012 Anchors Away), Sally Hansen X-Treme Wear in White On and in Black Out, and China Glaze White Cap (from the Anchors Away collection). It looks bizarre, but whatever, I know what it is. Then I added a moon on my other finger in CG White Cap, Dandy-Lyin’ Around (from 2013 Avant Garden), and Pelican Gray. 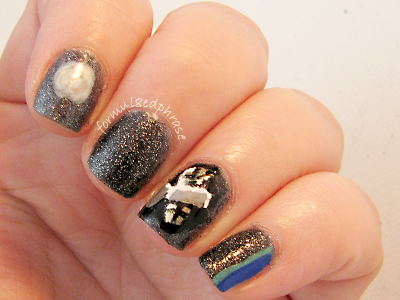 Note about Gobsmacked: no matter how diligently I cleaned up, that glitter goes everywhere, with no hope of my getting it off.

On my thumb and little finger (heh) are stripes in Color Club’s Age of Aquarius (the aqua) and Insta-This, both samples from Birchbox that my friend Tara gave me (thanks, girl!). They’re meant to be the curve of the earth and the glow of atmosphere. Idk. I was watching the manhunt on TV and fairly distracted. Way to go Boston area PD and FBI! Those folks are amazeballs.

Shining like a work of art
Hanging on a wall of stars
Are you what I think you are?

Next up: Polka Dots!